A Brief History of Brentwood Borough

Brentwood is a town with a rich and varied history.  The 1.4 square miles that constitute the Borough were settled in the late Eighteenth Century.  Many early residents were farmers of German or Scotch-Irish descent.  Whiskey and cherries were the primary agricultural products of the era.  In response to the institution of an excise tax on distilled spirits, area residents took part in the tax revolt known as the Whiskey Rebellion.  President George Washington arrived personally with federal soldiers to quell the uprising in what proved to be a crucial test of the recently reformed national government under the U.S. Constitution.

In 1844, present-day Brentwood was incorporated into the newly established community of Baldwin Township.  Encompassing over 10,000 acres, this area also included what are today the communities of Castle Shannon, Whitehall, and Baldwin Borough, as well as the Pittsburgh neighborhoods of Carrick, Overbrook, Brookline, and Hays.

As the Industrial Revolution spread from Europe to America, the area surrounding Brentwood became critical for the development of Pittsburgh as a global leader in manufacturing.  Lucrative coal seams were mined to feed the furnaces of the burgeoning glass and steel plants along the region’s rivers.  During this era, small villages developed along the important Brownsville Road trade corridor.  The Point View Hotel opened to house travelers making the journey to Pittsburgh, and it became a local fixture that served several sitting presidents and functioned as a stop on the Underground Railroad.

01, a streetcar barn was erected along Churchview Avenue adjacent to what is now the northern edge of Brentwood.  The bucolic town of Carrick soon transformed into a bustling streetcar suburb; it broke from Baldwin Township to first become an independent Borough and later a portion of the City of Pittsburgh.  Development quickly spilled over Carrick’s borders, as middle class residents of Pittsburgh fled the pollution of the river valleys for the quiet of what is today the northwest corner of Brentwood.

Frustrated with a lack of public infrastructural improvements in the decentralized Baldwin Township, a group of residents from what was then the community’s Second Precinct petitioned county officials for the right to succeed and to incorporate as the Borough of Brentwood.  On November 6, 1915, the Allegheny County Court of Quarter Sessions approved the transfer of 880 acres of Baldwin Township to an independent municipality.  The approximately 900 citizens of the new Brentwood Borough chose their first governmental officials in a special election held on December 4.  As its first legislative act, the Brentwood Council authorized the construction of a sidewalk along Brownsville Road in the new community’s business district.  Borough citizens gained control over public education with the establishment of an independent school district in 1916, and, in 1925, the nascent entity opened its first high school.

The long awaited opening of the Liberty Bridge in 1928 changed the history of development in Brentwood.  With motorists now having direct access to Downtown Pittsburgh via the Liberty Tunnels under the steep Mount Washington neighborhood, the communities of the South Hills began to experience significant suburban expansion.  No longer was Brentwood confined to a compact area at the terminus of the streetcar line.  Side streets adjacent to the Brownsville Road corridor were quickly filled with new homes, from Victorian-inspired mansions to modest duplexes, and a second business district sprouted near the location of the Borough’s new municipal park and pool.  In 1929, Brentwood’s boundaries expanded as the Borough annexed approximately 130 acres in the vicinity of Willett Road.  The inauguration of the Brentwood Motor Coach Company that same year afforded transit service to the thriving new subdivisions.  Population growth spurred the construction of a high school building located in the center of town, which was completed in 1932. 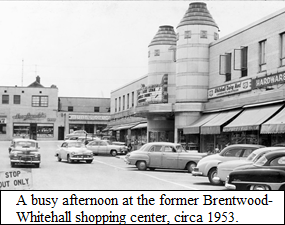 In the aftermath of World War II, a second construction boom hit the Borough.  Returning veterans, eager to buy a slice of suburbia, purchased new homes throughout the South Hills.  Stately colonials, cozy Cape Cods, and charming ranches were built en masse on the municipality’s outer streets.  In the middle of the Twentieth Century, the Borough population reached approximately 14,000.  Although it functioned primarily as a commuter town, Brentwood saw an expansion in commerce during this period.  The Brentwood-Whitehall Shopping Plaza opened on Brownsville Road in 1952 and offered the community major department and drug stores, while numerous small strip malls popped up along the recently upgraded Route 51.

While the majority of Brentwood’s housing stock was constructed prior to 1960, the town by no means has stopped growing!  To preserve its status as a stable, attractive, and dense inner-ring suburb, Brentwood has continued to expand and improve its infrastructure.  In 1990, the Borough cut the ribbon on a new library building, which allowed the treasured Brentwood Public Library to be moved from a cramped space in the basement of Moore Elementary School to an inviting and modern structure.  The Brentwood Fire Department also proudly opened the doors to its new facility in 2003.  Our community has also seen a surge in commercial redevelopment.  The antiquated Brentwood-Whitehall Shopping Plaza was replaced in 2003 with Brentwood Towne Square, which houses a multitude of stores and combines a Main Street feel with ample parking.  In 2008, the Borough saw the opening of a new three-story professional plaza, which provides prime medical office space.  In 2009, the Borough initiated a transformative park rehabilitation project, which, over the subsequent decade, has resulted in the investment of over $5 million into the beautifulcation and improvement of recreational amenities within this cherished facility.

Brentwood is a community that is in a competitive position to attract new residents and business.  As gas prices and commute times continue to rise, Americans are becoming aware of the drawbacks of low-density outer suburbs; however, not all citizens are willing to embrace the “back-to-the city” movement.  Brentwood’s environs fulfill the needs of current citizens by combining walkability and excellent transit service with adequate green space and parking, as well as by affording residents easy access to both the cosmopolitan attractions of the city and the retail destinations of the suburbs.  We warmly invite you to become a part of our friendly and growing community!